June the 29th (of 2014 of course) : DEMO AVAILABLE !
Read the "Readme.txt" file to know the basics things to know about the characters and the levels.
Most of the images in the dialogs aren't done yet, so don't be surprised if they are pics from the show for instance

This will be fixed later

I've been working on a project for the last couple of month : a fan game on the BLOSC universe ! The game is far for being finished, so don't except a demo soon, but I believe the game engine is finally over !

So, what's this game is about ? Well, playing Team Lightyear and fighting against the Evil Forces of the Universe !
For those who might wonder, the game will be quite similar to the Metroid series (and if you have never played those, get yourself a GameBoy Advance and the fantastic Metroid Fusion. Quick.) with the exception that here you'll be able to play more than one character. For example, Booster will go slower than XR, but he'll be more resistant ! Plus every character will have his own special ability

Let's do the advertising stuff :
Here's the "official" Tumblr

I've always used more the forum than Tumblr, so Pythonmelon will take care of it a lot more often than I do. (Doesn't my english suck sometimes ?)

For those who would like to know : I develop this game with Game Maker 7.0 Pro Edition


(The begining is blurry, don't know why)
The aspect of the walls and the ground isn't final at all, but the characters are !

That...that is so AWESOME! *grabby hands*

Have you been able to work out a plot yet, or who the bosses are going to be?

So, if anyone's concerned about it, Booster is now a playable character ! Which means that Team Lightyear is now fully operationnal !

I've also started to write the scenario. My idea is that they'll be at least a Story Mode, and maybe another kind of game, more in a "open world" style. For example, you'll have missions to do as Team Lightyear (Arrest a convict for instance) but you'll be free to walk around several planets and accept missions from non-playable characters.
_________________

You know, if you need any help with writing the plot, I'd be happy to provide assistance if you wish (doing the episodes would be an interesting idea, but I'm wondering if it might possible to use this game to expand on some little explored concepts that had been left hanging in the show).

First of all, thanks for your help :)I don't know if I'll need someone to help me out with the plot, but it's always nice to know that some are ready to help ^^

About the episode stuff, that could be an idea. Do you have any example in mind ?

And for the plot...I don't think the main story will be too much complicated. No big organisation betraying any governement while the Alternate Universe invade the regular one, and that Booster turns out he's a Vilain, but he's not because it was to trap Zurg etc.
I'll just try to make a good story with most of the BLOSC characters involved. That'll be already a good thing ! :p
_________________

Pfft, that sounds like it would be a hilarious crack fic. XD

On a more serious note, first thing that comes to mind is the Protector and the older history of the galaxy. I feel like that is a bundle of ideas and revelations just waiting to be cracked open; I doubt Natron would be the only thing left from that time.

These are suggestions that just came to me off the top of my head, but I'm pretty sure digging around will bring up some others.

Mhh, yeah, you're right, the older history of the galaxy has been just mentionned really quickly, might have something to do with this.

And here are the looks of the characters ! Well, some of it only...
If you wanna say anything on these guys, don't hesitate !

These look pretty good actually. Booster seems a bit squished, like he should be wider, but I'm wondering if that might be due to a constraint in the programming?

Also, the Star Command guard bot's left arm looks very different from its right--was that intentional, or due to trouble with perspective or something like that? Then again, it's been a while since I've seen the canon design for that, so that may just be me.

Well if I make him wider, I'm afraid he would be too big. No constraint in the programming at all but it looked strange to me. Plus, it seems to me that you're getting hit really often while playing, so the wider he'll be, the more he'll get hit :p

Yeah, you're right. Another "problem" I had with this one : the two arms are supposed to be the same, but if I make the right arm the same way that the left one, it looks strange...the right one isn't really vertical too.


I'm currently trying to write the script but also trying to design Tradeworld. I'll try to give a demo over here when I'll be done with Tradeworld, and I'll build a little level just to let you see how the game will be

For those who feel concern about this (and who aren't looking at the tumblr), I'm still trying to do the background of Tradeworld but I suck at this and I hate doing this. I love making the sprites of the characters but this...beurk.

So, I'd like to know if there's some people who like to do backgrounds. Let me show you what I'm talking about.

Here's an image of Metroid Zero Mission. Here's the background in it. 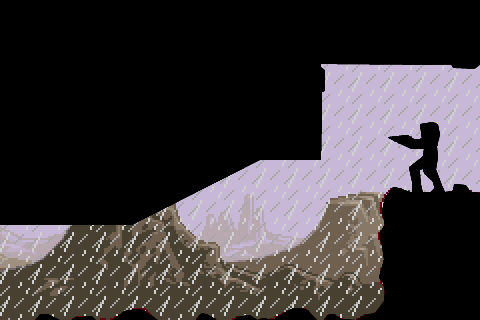 It's basically the mountains, the sky, the clouds...the landscape. (not the rain though)

For instance, in the case of Tradeworld, the background would be skyscrapers all around, since that's a huge city.

If you mean graphic backgrounds like this, then I'm sorry to say I do not have the experience to create backgrounds such as these, but I'll try to ask around for somebody who might. (:
_________________
"Do you know the legend of the Phoenix?...The Phoenix was a mythical bird that was consumed by fire, but always rose again from the ashes. Perhaps that's what the Phoenix represents-hope, which never dies." -Professor Charles Xavier, X-Men: The Animated Series

I'll keep on working on it anyway, I had some idea last night and I'll see how it looks !

EDIT : Here's a quick pic to show the disaster of those buildings of Tradeworld (and 42, but it looks way better !) 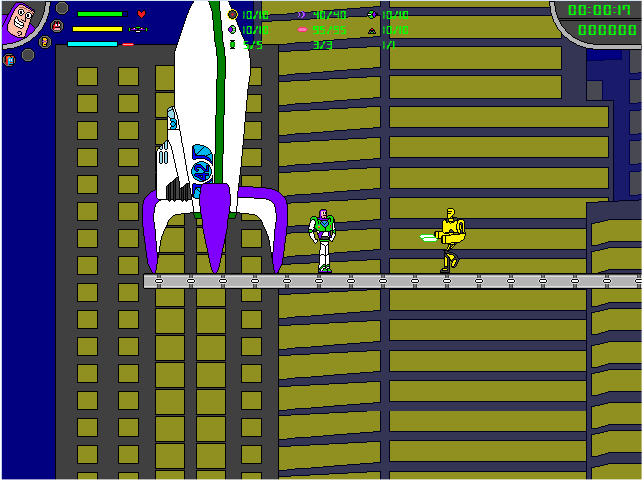 I don't know if I said it anywhere but the main story has been written. Only thing I can tell is that I don't know when it exactly takes place but NOS is still alive and XL is still a bad guy

Sweet~ Nice to see the progress on this. :>

Thanks for keeping an eye on it 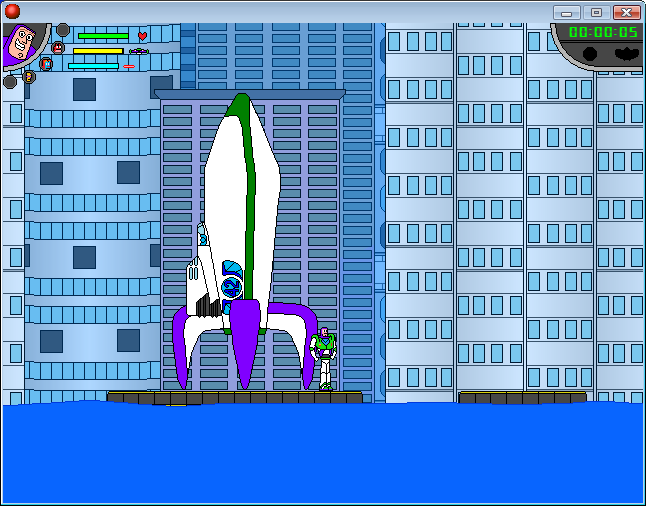 Buzz just landed with 42 on Tradeworld. 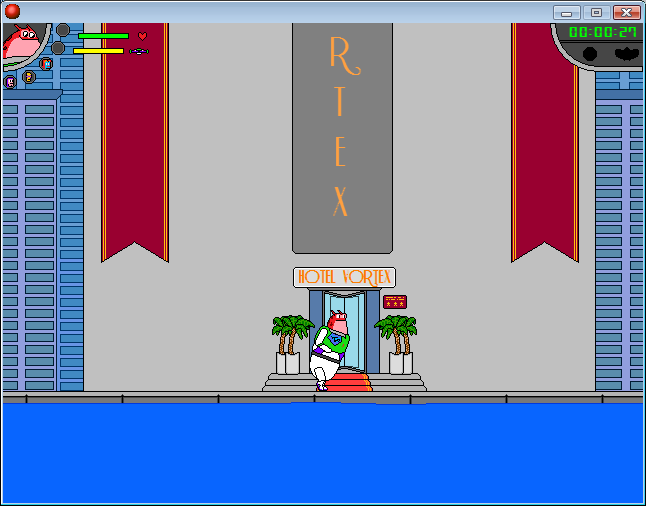 Booster is walking around and found an Hotel. 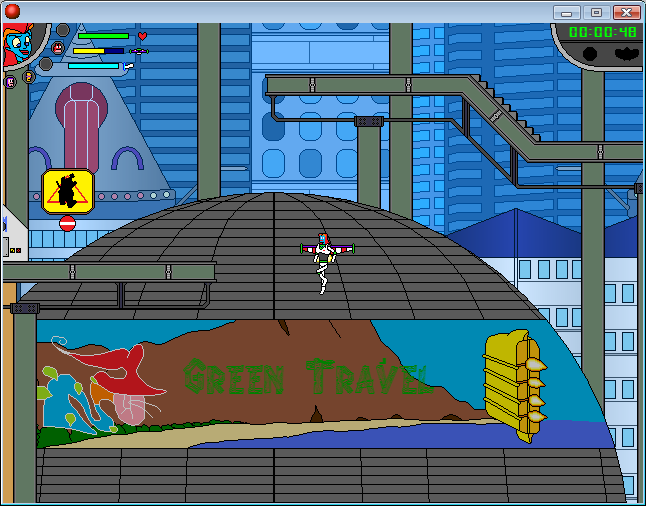 Whoa, Mira's flying ! Above what seems to be a Rhizomian Travel agency. 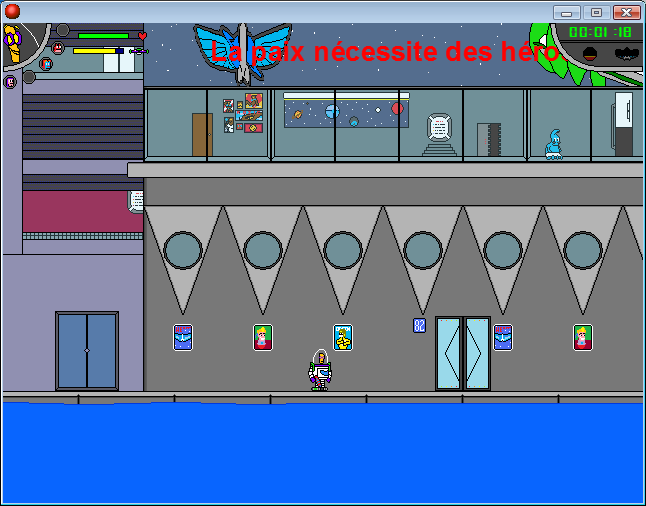 Wow cool is it a game? 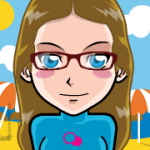 I wrote this on the tumblr but I'm saying it here too : I'm hoping to release a playable demo in the following month

THIS IS ALL AMAZING WORK SO FAR!!

It seems that I've been working on it since...the 20th of October of 2013 ! Time flies so fast...Did I mention here that mephew-J joined me to draw stuff in the game ?

So far, the game is doing great. Considering everything I've done on it, I almost consider it as a miracle ! I don't think I ever been able to focus myself on one project like this one...
The demo version should be out in the first half of June, it will be the tutorial that will be present in the the final game...it will be short (one level is short) but it will give you people something to try and see what's wrong with it !
_________________

The game is going great !
Be prepared to control Buzz before the end of the month

_________________
"Do you know the legend of the Phoenix?...The Phoenix was a mythical bird that was consumed by fire, but always rose again from the ashes. Perhaps that's what the Phoenix represents-hope, which never dies." -Professor Charles Xavier, X-Men: The Animated Series