Some people watch movies or show because of the actors... I do it because of the VOICE Actors. One of my favorite voice actors is Florian Halm (German Voice of XR), but I didn't really start to look into him until BLoSC.
Since it is funny how little it can take for a voice actor to define a character new all the way, I like to look into their acting and compare them to the originals.

I'd love to start off with some definitions right away, but... I'd have to reupload some stuff for this and the videos aren't currently available. My apologies - I will get to that at a later time.

One of the few that I have still left however is this little Gem...

First off the Voice Actors and the Translation.
German is a wordy language. GOD DAMN is it wordy!

At the point where Miller basically goes all “door, door, door, door” Halm has to speak a whole mess of words: “Let’s get out of here! C’mon open up, help!” This sadly gives away a lot of the scare factor since no one who’s scared can think of so much to say; especially in a coherent way and without spluttering.

Where it balances out again imo is the screaming. Halm is a good screamer, he’s a loud screamer. Heck if there is ANYTHING he's good at, it's screaming.

00:23
the "shock moment" is very quiet in the English version... especially when you compare it to Halm going all out. This kind of stuff is a lot clearer in the German version since Halm is a little bit louder in general, but eh... does it need to be clear? I guess not. Don't make yourself look like a prey so much, XR!
On the contrary though, shortly before the blackout Larry lets out a nice yelp (short and sweet) while Halm whines and then seems to bite his tongue instead.

00:43
Dear God the evil laugh xD
Larry’s laughter give me chiiiills <3
Halm’s laughter is... to be true... pathetic. Not to mention that the closing chuckle is barely heard... it’s there, but barely which is just... too quiet for a voice actor as loud as Halm.
This drawback drags throughout the whole episode... He tried to play XR evil but Halm's voice simply isn't suited for this kind of character. Sure, sneaky, witty, silver-tongued, he gets that a lot, but not downright "evil". (Lately on TV I watched G.I.Joe and damn, no Halm, please no more voicing of antagonists... xD") 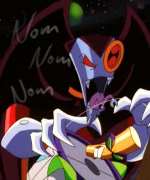 oh goodness I love XR's voice in german~ His scream is fantastic (lol thats the part i love most?)

and I definitely agree that its good hat they changed nos's voice 0.o the first one will now give me nightmares
_________________
"So, try and stop me you self-proclaimed 'normal people'"- The Major (Hellsing)


This is a tad longer of a clip, but I mainly want to focus on the deactivation part and how both oft he Voice actors „deal with it“.

Both, Larry and Halm do a GREAT Job on this part, and yet – the interpretation is so very different.

Larry imo sounds more nervous than anything. During 0:17 if you listen carefully you can determine how the flow in his sentence cracks (When you say – Complete – Exactly – What are you – getting at – there?)
The flow remains in Halm’s version, which sadly lacks a bit of the edge.

When the deactivation itself is executed; Larry sounds… mostly sad. He draws out the “2” of 42’s name a lot which I like, but eh – that’s about it.

Halm, instead of sounding sad or nervous like his counterpart, pretty much makes XR feel “helpless”. I’m pretty sure you can distinguish this without actually speaking the language yourself if you compare how 42’s name is drawn out in the closing segment.
(You may also take notice of the added little sounds at 01:09 (or previously to the analyzed part 0:45 – Halm does those a lot)
_________________