Title: 25 O'Clock
Author: ab103/Alexa aka blueglows
Fandom: Buzz Lightyear of Star Command
Character(s) / Pairing(s): NOS-4-A2, NOS/Mystery Ranger
Rating: PG13
Word Count: 500
Warning(s): One curse word at the end and mention of minor adult themes.
Disclaimer: Buzz Lightyear of Star Command is owned by Disney/Pixar. The song "25 o'clock" was originally written by The Dukes of Stratosphear (XTC). I merely wrote this story.
Summary: With his internal clock broken he could not help but feel upset. Not only could he not keep track of time, he could not keep track of the one that he desired.

AN: I originally wrote this story in 2009 and it happens to be the most recent BLoSC thing I have written, but I happened to find it while looking through the BLoSC archive on FF.net and decided to add it here. This was inspired by a song cover by They Might Be Giants. It's not exactly what the original lyrics imply, but it works in a way. Obviously it's a pairing story, but what that pairing could be can be up to you to determine. Enjoy!

His internal clock was currently broken and had been for a while. It was a constant source of frustration, not knowing what time or day it was. Even more frustrating was that he had just memorized that team's schedule. THAT team had a member on which his affections were currently placed. Now, since he was not even sure if it was night or day without daring out of his hiding place, he couldn't follow the pathetic Star Command team to watch the one he lusted over.

Whenever he found that it was in fact night and safe for him to leave his lair, he spent his time, however long that may have actually been, searching for a new internal clock while he hunted down unsuspecting robots. He had found a while back that his prey also made for a good source of parts if he were able to find ones that corresponded with his design. However, he had not been able to yet find a model of a chronometer that would work with his current data processer. Everything was either too outdated or too brand new for him to be able to use it. Obviously, this was the universe's way of telling him that he needed an upgrade. Unfortunately, the universe was also ironic and hated him since he knew that he had no where to go that he could get a decent upgrade without being sold for spare parts while he was conked out for the upgrade download.

Breaking the other robot's chronometers proved to be a good stress relief, he had realized after throwing a few against the wall in aggravation. He could drain the robots and replenish energy, and then after finding their internal chronometers couldn't help them, smash them against the wall. It put him at ease to know that at least THOSE robots would not be able use them again should they somehow be revived. Why should they get the pleasure of knowing the time of day and not him? However, stopping their clocks only helped his rage against not knowing the time. There was no help to speak of for his want of that space ranger.

No, he just had to live with knowing that time ticked away without him knowing how fast or slow it was, keeping him that same amount of time away from his current illicit interest. He WANTED that ranger, but now instead of "justice" keeping him away, it was his own chronometer.

He knew that minutes, seconds, HOURS ticked away, though to him it felt like time had stopped. He knew that his wanted passion followed a schedule that he could no longer keep track of. With every clock that he smashed, he felt himself closer and closer to just tracking down his object of lust regardless of whether or not he knew where Star Command scheduled that team to be at the moment.

If only his damn internal clock would stop flashing that it was currently "25 o'clock." 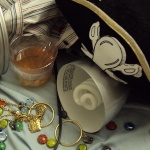